About a month ago I wrote "Why Javascript Development is Crazy". 120,000 people hit that page, and 3700 people signed up for my newsletter, The Invasion.

So my internet exploded for a few days. In the aftermath, two questions emerged:

I will try to address the first question here. How you should proceed without a framework is a much bigger question. I'll be working my way through answering it in the coming months.

Seven years ago I started a job at a company I'm going to call Acme. I call it Acme because it's exactly like the Acme in the roadrunner cartoons. You can order any, wacky thing imaginable and it'll be at your place of business on the same day or next day.

They have crazy good margins and make a mega-shitload of money. I learned a lot about business from these folks, but I also learned about systems.

Acme's website had complicated user interfaces to help customers find that one hex nut they need for their billion dollar helicopter prototype. Which is why, in the early 2000's, Acme's website started to evolve into a single page application, before that term was even coined to my knowledge.

The Javascript codebase at this place was complicated. But there's more:

If you're guffawing at this and thinking these people were idiots, this would be a good time to point out that they had very little down time, churned out new features regularly and made gigantic mountains of money year after year. So they are laughing at you and your snobbery all the way to the bank.

Do you get paid to write code? Then you work for a business. When a business decides how to spend its developer budget, it doesn't always make sense to spend money on doing software the "right" way. The point here is that Acme's choices appear crazy to software developers, but it's mostly rational to the people who were writing my paycheck, and that's what actually matters.

Using a JS framework, even in a situation as seemingly bad as Acme's, isn't necessarily a good business decision.

So how should Acme proceed? How does a business decide if it should use a JS framework? I've already explained why it almost never makes sense to start a codebase with a framework. So if we pretend that something like Angular existed back when Acme's code was morphing into a SPA. At that point, should they have used a framework? Should they use one now?

When a company picks a framework, there are costs and risks:

What if support for this framework disappears in five years?

Can your organization afford to maintain this framework on it's own? Do you have enough expertise on your team? For most companies this isn't going to be true, and frameworks die all the time. You have to put your finger in the air and guess if the productivity you gain from picking a framework is worth the cost of switching to something else later, or the cost of dealing with unsupported software for years while you try to find budget to switch to something new.

If your codebase is smallish and you're in the kind of business where you're throwing out code and rewriting all the time, (more of us do this than we'd like to admit), then the framework is probably worth it.

But if you're code base is huge and you're looking at your 5 year roadmap and it's filled with ambitious new features that are going to be core parts of your business, the cost of picking a framework that dies in 5 years is much greater, and the only way to decide if it's worth going forward is to think through the rest of these questions ...

How much productivity will we lose to the learning curve for the new framework?

If you're switching to Angular, unless you hired all Angular developers, everyone is going to have to get up to speed. You're going to have to pay for training and then your developers will still spend the next 3-4 months asking "how do I do this in Angular?" even though they could have done the same thing with Jquery/vanilla JS without thinking about it.

Could we build a feature that makes us more money with the development time we will spend integrating this framework?

For most profitable companies, the answer to this is "yes".

Will the framework allow us to build more money making features more quickly in the future?

In theory this is the value of a framework. You get more value from a framework the bigger your team is, the bigger your codebase is and the speed at which you are building new features. Some codebases are just coasting along for good business reasons, and wouldn't benefit from switching to a framework.

Okay, so this probably sounds like a very complicated decision, but for a lot of companies, it's more straightforward than it seems. 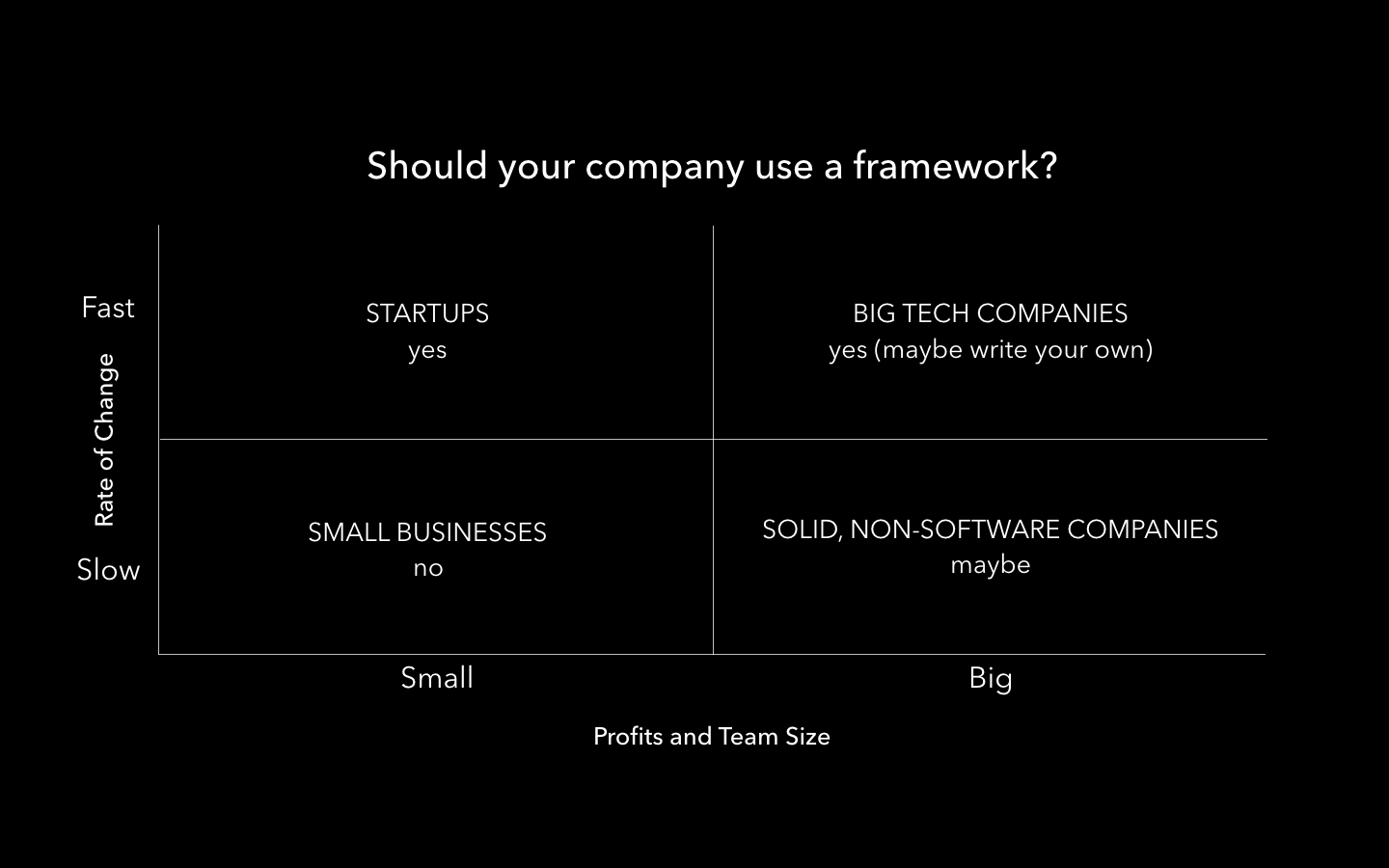 The top, left of this chart is where startups live. The faster your codebase is changing, the less risk there is when jumping on the latest framework bandwagon. If you're throwing out features left and right because you haven't even figured out what makes money yet, it kind of doesn't matter if the framework you're using dies, because you're about to throw that code out anyway.

If you're more productive in a framework, and you work for a startup, I would say using a framework is a good choice. With the caveat that most people are less productive using JS frameworks than the would like to admit.

In the bottom left corner of this is either the classic small business where software is not a core component of their business, or a small software company. If you're a developer doing work for small businesses, you have no business using Angular/React/whatever. Instead use rock solid, been around forever libraries that work in every browser ever invented. If you're running a small, software business, I would say in most cases the risks of committing to a framework outweigh the benefit.

In the top right of the corner are companies where software is a core part of their business, so they're knocking out new features left and right and probably throwing away chunks of code and doing more rewrites than they care to admit. They have big teams, and new features print money. So it makes perfect sense to train up their teams to use a framework so everyone is starting from the same place and features get written more quickly.

The more profitable you are the less risky it is to lose support for a framework down the road. Because when you're evaluating whether you should do the work to switch, the long term benefit is almost always worth it. Heck, if you're big enough and profitable enough and software is your core business, it makes sense to write your own framework like Facebook, Google, etc.

The bottom right corner of this quadrant is where Acme sits, and its far less clear what the right choice is here. Software is not the core business, but software systems enable the core business. The industry doesn't move quickly, so the software doesn't need to change that quickly. But new features help customers buy more widgets. Ideally you could build on a framework that will be around for 50 years, which doesn't sound crazy to Acme because most of its codebase is already 40 years old. Of course that doesn't exist, so building a custom framework starts to sound right, because at least they won't be trapped in a dead ecosystem in 10 years. So then Acme would have to create everything from scratch, but that up front cost starts to look pretty small when you're thinking about the next 50 years...

Should Acme switch to a framework? There's no easy answer. When I was a developer and thinking only about software, the answer was obvious to me: of course they should start using Angular! But since I've been running my own business, I see software through a different lense now, and the decision is not straightforward.

Pause and think deeply before committing to a framework, and if you're making the decision on behalf of a business as a consultant, CTO, whatever, do the business a favor and take off your software developer blinders.

Want to learn more about how to write Javascript applications without a framework? Or learn enough Javascript so you can pick up a framework easily, when it makes good business sense? I'll be writing on these topics for The Invasion in the coming weeks and months.

I'm probably a lot like you. I make stuff for the web. I have a CS degree, but the last 11 years of my career have been a more potent teacher.

Recently, I wrote a book on web development called Sketching with CSS. I also run a training company for developers. I'm an author in Smashing Magazine and I've written some cool open source projects.

Today, I'm an entrepreneur. In the not so distant past I did the usual 9-5 thing doing web development for a couple of big companies.

You can also email me: [email protected]